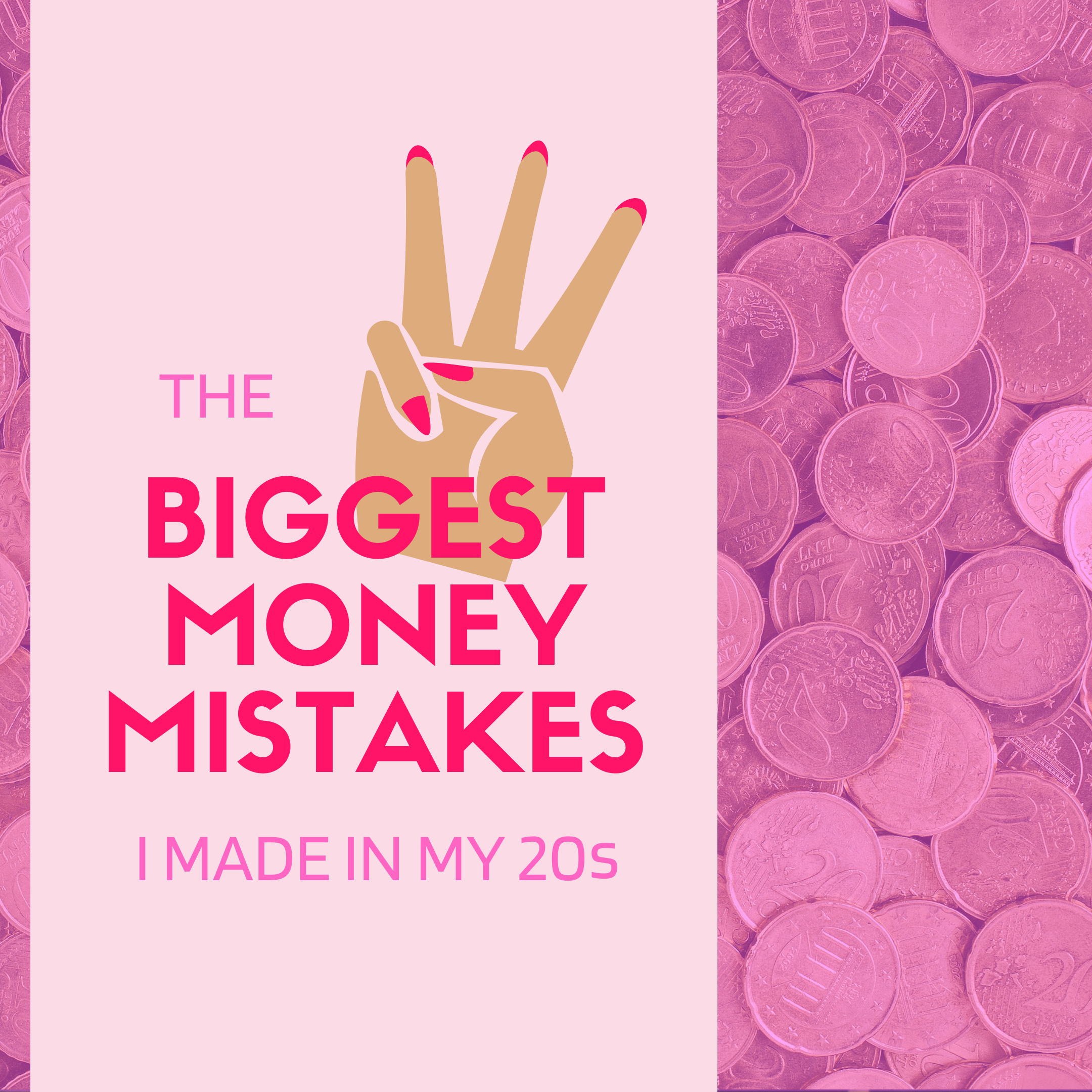 In 2014 I was a newly minted MBA who was ready to take on the world. I thought those three letters after my name meant the money would just come rolling in and I would be wealthy in no time! Boy was I wrong.

Even after spending four years in undergrad studying money and another year studying business in grad school, I had no idea how much discipline it actually takes to get rich. My two degrees allowed me to find a good job with benefits and a decent salary, but I quickly learned that a decent salary on its own doesn’t build wealth.

Once I had this realization, I decided that I needed to figure out how wealthy people get wealthy. What do they do differently than most to become financially stable, and eventually rich? What I learned is actually quite simple. They spend far less than they make, and they use the money they have to make more money. Since learning this I’ve made a lot of changes to set myself up to build wealth, but I’ve also made several expensive mistakes. To help you avoid making the same mistakes on your personal finance journey as I did, here are the 3 biggest money mistakes I made in my 20s.

After I became eligible for my 401K at my first job, I spent about a year and a half dragging my feet on setting it up. Even though I had studied finance and knew how amazing employer matches and compound interest were, I was enjoying traveling and didn’t want to stop shopping. I was living the good life.

Eventually, the nagging thought in the back of my mind about needing to set up my 401K became overwhelming, so I decided to research my options and set everything up. The first thing I learned was how much money you actually need to have saved to retire. If you envision a carefree retirement for yourself, you’re going to need several MILLION dollars invested to make that happen. That seemed like an impossible number to reach to me, so my next step was to figure out how on earth I could get there.

This led me to learn that you should contribute a much higher percentage to your retirement accounts than you think you should, especially in the beginning. This is because of compound interest. Compound interest means that you make money on any interest you earn, as well as what you contribute. If you contribute $1,000 to your 401K this year and see a return of 10%, you’ll have $1,100 at the end of the year. Next year if you earn 10% again, you’ll have $1,210. The extra $10 you made in year 2 was from the 10% interest you earned on the $100 you made in interest in year 1.

At first, the additional earnings you receive will be small, but as these gains accumulate you will see a snowball effect on how much you earn. If you invest $100 each month at 20 and continue until you’re 60, you’ll have $632,500 at 60 if you received a 10% annual return. Only 8% or $48k of that will have been from your contributions. $584,405 will have been made from the snowball effect of compound interest. If everything in that scenario stayed the same except that you started investing at 30, by 60 you will only have $226,048. That’s a difference of $406,452 because you didn’t benefit from compound interest for 10 more years. On top of that, 16%, or $36k of your earnings will be from your contributions, instead of only 8%. Compound interest is your BFF when it comes to building wealth, but to see huge benefits from it you need to start investing as early as possible.

While one and a half years of dragging my feet may not seem like a lot of lost time, that’s 15% of my 20s, and I was already 24 when I was first offered my 401K. That means I had less time to accumulate the gains from compound interest to start with and was still putting off contributing to my 401K. To catch up, I would need to make much larger contributions to be able to accumulate the several million dollars I needed to have by retirement. In the earlier example, you can see that contributing $100 every month for 40 years will only get you to around $600k for retirement, which isn’t going to be enough. If you really want to live out your vision for retirement, you’re probably going to need to contribute a lot more of each paycheck to your 401K than you want to.

No matter how old you are, if you haven’t started contributing to a retirement account, you’re missing out on a ton of future money. Don’t make the same mistake I did and keep dragging your feet. These links give you all of the info necessary to understand how much money you will need to have to comfortably retire, and how to set up your retirement account and start investing today.

2. Increasing my expenses when my income increased

My starting salary out of grad school wasn’t the greatest, but I quickly received promotions and salary increases and doubled my salary in just a few years. With each salary bump came more spending on luxury items. By luxury, I don’t mean high-end; I mean things I didn’t need. I would do things with my extra money like shop, or plan another vacation, or move into a more expensive house. I spent everything I made and didn’t save or invest any of it. To outsiders my spending made it seem like I was becoming more financially stable, but my financial stability was actually remaining the same.

Like 24 year old me, most people think that being financially stable means earning enough money that you can easily pay your bills every month and also afford to purchase some luxuries. This common line of thinking couldn’t be further from the truth. No matter how high your salary is, if you spend all of your money every month, you’re living paycheck to paycheck. A person who makes $250k/year and saves or invests none of it is no different than a person who makes $30k/year and does the same thing. They may be spending on different items, but they’re both financially unstable. If either of them loses their job, they won’t be able to afford their house or cars, no matter how nice they look on the outside.

Remember at the beginning of this post when I said one of the things I learned about rich people is that they spend far less than they make? That habit is what allows them to build a savings and become financially stable. Having financial stability means that you can maintain your lifestyle for at least several months if you have a large drop in your income. To create this stability, you should strive to have at least 3-6 months of expenses saved. Start automatically sending a portion of each paycheck to a high-interest savings account. Once you’ve reached your savings goal, you can then start investing to grow your wealth and begin generating passive income. Having passive income and a savings will allow you to comfortably spend on luxuries when the money is rolling in, but also smoothly chug along through the rough patches.

While I love my husband dearly, buying his expensive car straight out of school is one of my biggest money regrets. (He wouldn’t agree with this, but this isn’t his blog now is it!) He had always wanted a Subaru WRX STI, so as soon as he graduated college he treated himself to his dream car. In total, the car cost more than $30k, and years later we’re still making insanely high payments on it. His sky-high car payment comes on top of the student loans were also paying off. While we have a healthy debt to income ratio, so much of our money that we could be using for other things goes to pay off debt each month.

While paying off our student loans sucks, taking out these loans isn’t something I regret. That’s because I consider our college degrees to be appreciating assets. Appreciating assets go up in value over time. Since we expect our income to increase far more over the long term than we will end up spending on interest on our student loans, I consider them money well spent.

My husband’s car on the other hand… not so much. While cars are technically considered assets, they are depreciating assets. That means that they decrease in value over time. In short, we bought a car we can technically afford (even though I get nauseous at the thought of the payments), that we will end up paying more for after factoring in the interest charges, and we will never be able to recoup our money when we sell it. It honestly couldn’t get worse than that.

While I’m glad that my husband loves his car, financially it was a huge mistake to buy it. We will end up losing a lot of money to interest and are tying up funds that we could be using to invest and build our wealth. Remember how important it is to invest as much as possible as early as possible? Buying an expensive car right out of college ties up money that you could be using to invest and make tons of money on in the future.

Since cars are necessities for many people, if you need to take out a loan to get a car, that’s ok. If you don’t absolutely NEED a new car right now, but you want to buy one soon, you should look at the trade-in value for your current car vs the price of the car you want to buy and start saving for the difference. If you pay for the car in cash, you’ll save thousands of dollars on interest that you can then use to buy appreciating assets and build your wealth.

We all have regrets about what we haven’t done or should have done with our money. These regrets often keep us from taking the steps we know we should because we’re scared of making more mistakes. Some people started investing in high school and will make a lot more money from compound interest than I ever will, but that didn’t stop me from starting. If you’re in your 30s and haven’t started your retirement account because you’ve already missed out on a lot of potential earnings, think about how you’ll feel in your 40s after skipping 10 more years of earnings. If you can go shopping or out to dinner each month, you shouldn’t be living paycheck to paycheck and should start contributing to a savings. Buying things you want but can’t afford only will make it harder for you to get the things you want in the future. I made all of these mistakes, but turned the guilt I felt about them into action. Feeling guilt about prior financial mistakes means that you have acknowledged that the mistake was made, and you won’t make it again in the future. Stop letting it hold you back from doing what you know needs to be done. Never starting to save or invest will hold you back far more than any of the minor mistakes you will make, and then learn from, in the future. Take it from me.